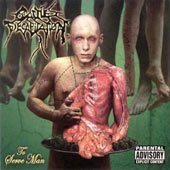 US death metal combo Cattle Decapitation are truly one of a kind, but not musically. On their Metal Blade debut the band presents 13 cuts of grinding death metal with vegan lyrical content. Musically they have a lot in common with "Corpsegrinder" era Cannibal Corpse without the interesting dynamics and hammering groove. "To Serve Man" opens with 'Testicular Manslaughter' which is basically an entire blastbeat track. 'I Eat Your Skin' and 'Writhe In Putressence' bring back the glory days of Broken Hope. Probably the major complaint with "To Serve Man" is that Cattle Decapitation throws their all into the first track and does not deviate from that formula through out the following 12 tracks. 'Land Of the Severed Meatus' finally sees the band incorporating some kind of structure into their blasting no-thrills death metal with breaks, mosh riffs and some kind of variation in the drumming. Being halfway through the record now Cattle Decapitation have already lost the listener's attention. 'Pedeadstrians' is another track worthy of your attention which shows that Cattle Decapitation can write interesting death metal if they want to. 'Long-pig Chef and the Hairless Goat' follows in these footsteps. Josh Elmore's guitar holds barely enough punch for this genre and David Astor's drums are powerful enough to be annoying. Elmore does however re-instate the use of guitar leads. These leads aren't truly functional as a whole but deserve a mention anyway. Bassist Troy Oftedal wrote most of the music on this album, which might explain why the bass only is audible three times on the entire album. Travis Ryan's vocals are inarticulate and uninteresting due to the poor choice in vocal lines. The artwork by Wes Benscoter is one of the few highlights on this messy record. The lyrics are probably the most interesting of the entire record as they illustrate the band's vegan concept rather well. Given the circumstances that "To Serve Man" is Cattle Decapitation's debut effort this record isn't entirely bad. More lacking in execution and songwriting than on interesting ideas Cattle Decapitation are not destined for obscurity yet. This outfit certainly has the potential to grow out to an interesting entity. Greatly plagued by the brutality-for-brutality's-sake stigma "To Serve Man" would have worked splendidly as a 3 track EP, but not as a full length record. Avoid or buy if you're truly collecting anything that bears the death metal mark.