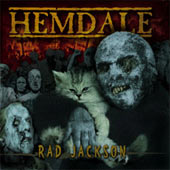 "Rad Jackson" compiles the entire discography of legendary Ohio death/grind formation Hemdale. This 38 track disc contains the band's classic demo as well as their long out-of-print splits with Exhumed, Exit-13, Disgust. The first 13 tracks are the Exhumed split "In the Name Of Gore" originally released in '95 on Visceral Productions. If you never heard 'Delicious Gory Fun', 'Tasty Hemorrhoidal Tissue' or 'It Burns. and It Just Plain Smells Bad' before, you might want to further investigate your death/grind classics, pronto! This part of "Rad Jackson" is concluded by a cover of 'Curse the Gods' by German cult thrashers Destruction. The next 5 tracks are the Exit-13 split originally released in '96 on Visceral Productions, including Napalm Death ('Rise Above') and Grave ('Extremely Rotten Flesh') covers. The following 4 tracks are the Disgust split originally released in '97 on Visceral Productions. Also included is Hemdale's 14 track demo which was originally released in '94. As far as I hear nothing has been re-mastered whatsoever which preserves the authenticity of the presented material. As always, Relapse has done an outstanding job in compiling this quintessential long out-of-print material in a beautiful package. The artwork alone justifies the purchase as it as computer rendered collage of images from classic Italian zombie/splatter movies through the late '70s to mid '80s. If you don't own any of these death/grind classics yet, pick up "Rad Jackson" and prepare to get your head ripped off.