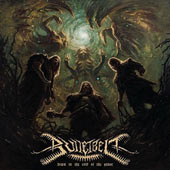 Every now and then as a reviewer you come across bands you just want to kick in the teeth. Not because their music isn’t good enough, or because they don’t master their instruments. No. Sometimes I just want to whack bands across the head and scream to them: “be more metal, goddammit”. Not that anybody ever listens to what I say or write. Bulletbelt is a side-project, or rather parallel band of Wellington, New Zealand based heavy metal outfit Red Dawn. I’ve never heard of either band before this release, so I’m not going to make comparisons between the two. Before being in any of those two bands, drummer Stephen Francis was in Karnage, whose guitarist Sam Totman would later make a name for himself in the rather overrated, vacuous power metal band DragonForce. Now before all you sexually confused and closeted homosexuals start sending me hatemails, I have no bones to pick with DragonForce, cos I don’t care about them. They are stupid, which is probably what attracted you to them in the first place. In a lot of ways this is stylistically similar to Virginia black/thrashers The Day Of the Beast, who have this particular niche cornered. The biggest difference is that The Day Of the Beast does this thing just plainly better, and has more interesting lyrical subjects to boot. New Zealand has better things to offer than this band. Unless Bulletbelt transforms itself into a more violent, aggressive and more ambitious unit by its next release, they will no doubt be overshadowed by regional acts that are just plainly better and hungry than they are. Now, I’m not going to wait for that to happen. I have better stuff to do. Hey! Look there, another record. I shall listen to what is in it and tell you whether it was better than this fluffy and inconsequential record. Then again, I just could watch “Bad Taste” as well...