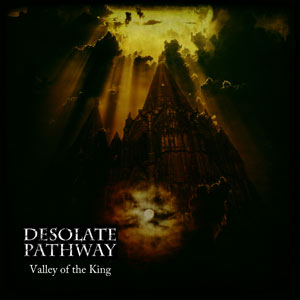 The United Kingdom has a rich history in doom metal with institutions as Cathedral, Esoteric, My Dying Bride and genre forefathers Black Sabbath. Desolate Pathway, the new band of Pagan Altar guitarist Simon Hempstead, only released the 'Purgatory' single prior debuting with this independently released and distributed album. "Valley Of the Kings", a concept album chronicling a fantasy tale written by one of the band's members, is mostly indebted to the likes of Cathedral ("The Forest Of Equilibrium") and early Solitude Aeternus. The rudimentary riffing and chord progressions are strengthened by emotive lead playing. John Perez is a definite influence in that regard. Mags', the only female member of the band, drumming is mostly similar to original My Dying Bride drummer Rick Miah. The stand out track is album closer 'Upon the Throne Of Lights'. 'Shadow Of the Tormentor' is interesting because of its prominent bass guitar licks, and 'Season Of the Witch opens with a vintage galopping Iron Maiden riff. "Valley Of the King" isn't out to change the genre, but one that is completely without pretense and/or gimmickry. Desolate Pathway strips the genre down to its bare essentials, and that is exactly what makes them so appealing. Even the production is kind of baroque in its functional minimalism. 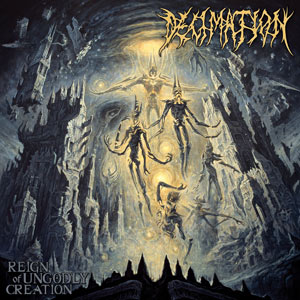 Decimation is probably Turkey's most visible export next to Cenotaph. They play with a bit more dissonance, and actually attempt to sound evil. It's not the type of release that Comatose Music usually specializes in, although it has all the makings of a Comatose release: no solos, nearly constant double bass, undecipherable vocals, questionable production values, etc. It isn't as blisteringly fast, as Dying Fetus inspired, nor as flat sounding as is usually the standard with the label. It is reminiscent of "The Mystical Gate Of Reincarnation" Kataklysm in its thickness and drumming, and Tom Wilkinson era Immolation probably is a big source of inspiration too. A more varied vocal approach, and a few solos wouldn't have hurt either. As per contemporary standard the album is unforgivingly…. Unforgiving – but at some point people want songs, and that's where Decimation falls flat. It's not the amount of blasts, monstrously deep grunts or impossible riff sequences that count, but the actual songs – and this is where Decimation falters. "Reign Of Ungodly Creation" is a lot of things: functional, technically impressive, great in both design and layout – but also entirely redundant, and a pale imitation of more popular and better brands. The overlong songtitles are neat (Demilich did it far earlier, though) and the artwork is actually fantastic given how frustratingly mediocre this record is. These men know their way around their instruments, and if it weren't all so terribly one-dimensional and utterly without spirit this little death metal album would actually be tolerable, or god forbid, enjoyable even. Alas, it is not to be.