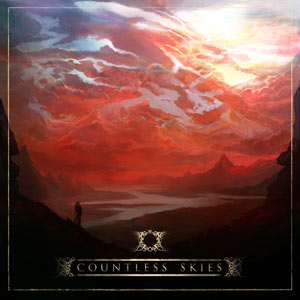 They say that imitation is the sincerest form of flattery. In the case of UK death metal band Countless Skies they clearly are inspired a great deal with Australian act Be'lakor from whom its name is derived. However where most imitations of an earlier archetype (or more popular brand/sound) fall flat is that they forget to infuse something of their own into that which they imitate. Countless Skies, despite its obvious origins, take what Be'lakor did so well before them, and add their own spin to the established formula. It isn't going to reinvigorate the Swedish melodic death metal subgenre (it, sadly, has been swallowed whole by the metalcore movement), but it at least proves that there's still vitality to be found within it. Countless Skies does what it do well enough to be not simply written off as a simple knockoff a more established band. In fact they are very much on the verge of writing their own definitive album in the genre. Granted the production job is fantastic in certain areas, and problematic in others – but despite these shortcomings the band is able to carve out something very respectable regardless of the mimicry.