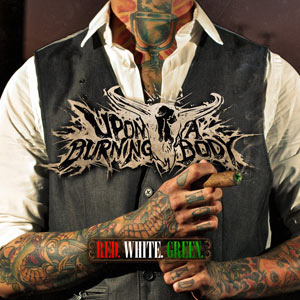 I don’t know who Upon A Burning Body are, but I do know that they apparently really, really, really like Quentin Tarantino and Robert Rodriguez movies. What I also know is that this a Sumerian Records release, so that this sucks harder than the average chick on Exploited College Girls is no surprise. Neither is it a surprise that this is deathcore, the very fucken dumb and stupid kind even. I don’t even fucken know, is this deathcore? Cos half of the time this sounds like rap/hiphop with breakdowns and “heavy” riffs. The vocalist never shuts up for a second, for one, and there a fucken gang shouts too. I suppose this is all very impressive when you are a 14 year old virgin that shops at Hot Topic, but those of us who actually have good taste will avoid this like the fucken plague. Speaking of which that illiterate douche Johnny Plague from the entirely awful Winds Of Plague apparently sings on this record too. For fuck’s sake, it’s all here: the inane, self-empowering, woe-is-me lyrics, the thinly veiled hiphop beats, those stupid bouncy Meshuggah “riffs”, “Digimortal” era Dino’s Cheese Factory songwriting (a term used very loosely) and a vocalist that never ever under any circumstance shuts the fuck up for three seconds. I bet all these dumb fucks have tribal tattoos, giant earlobes, scene haircuts and wear Affliction clothing. The last time I reviewed a deathcore band around these parts it was the fucken awful Oceano, and I’m still having nightmares about that. The lack of social skills, illiteracy and collective virginity on display here is simply astounding. This is body music for trailer parks, gun-toting rednecks and basement-dwelling nitwits across the American continent. There is absolutely no fucken good reason why anybody sensible would want to listen to this. This shit sounds just like every other deathcore band (on Sumerian, or elsewhere) – but it’s just repackaged, rebranded, and stuffed with enough of a recognizable gimmick (they like dumb movies) that every fucken hipster and stupid kid from here all the way to Malaysia is jumping up and down in excitement. Since I actually have good taste, and some semblance of what classic extreme metal (death, black, grind, doom) sounds like, I fucken advise you to stay the fuck away from this as far as humanly possible. If this band plays near you, boycott their shows. If they sell their records near you, destroy them with fire. If you see band members hanging around your neighborheeds, slash their tires and insult them. Whatever the fuck you do, don’t encourage them in any shape, or form. We don’t need more of this crap, in fact – we need far LESS of it. Change starts with you…

sumerianrecords.comFlemming Gabin ________2 search for Upon A Burning Body