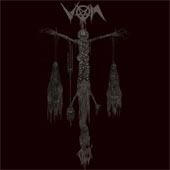 Cry me a fucken river, build a bridge and get over it already, you sad sack of shit. It’s not my fault it took you two decades to get your stupid band finally operational. Von, for whatever unfathomable reason, is spoken of in hushed tones of reverence in some circles. Out in the real world however there are people who are able look at things and recognize them for what they are. I don’t care how ‘cult’ or influential you were ‘back in the day’, when your first release in nearly 20 years consists almost entirely of previously released archive material you’re just coasting of whatever little reputation you had. There is no other way of putting it. Von formed back in the late ‘80s, and while it is probably true that they were the first US black metal band, let us not forget that Von’s first recorded output only arrived in 1992. Nunslaughter and Sathanas both formed in the same year (or a year later as is the case with Sathanas, to be truthful) and both carried a heavy black metal vibe in more ways than one, and both had demos out long before Von. I don’t know what it sounds like to you, but this whole reformation sounds like somebody being nostalgic of past glories and very much willing to relive the past through what can only be reasonably described as somebody having one hell of a midlife crisis. Yes, “Satanic Blood” compiles all of the band’s prior demos, EPs and assorted recordings in one package - with a few new songs to boot. There’s this little thing called getting your money’s worth, and this is where this package falls particularly short. Of course nobody in the right mind is waiting for 20 years old recordings culled off dusty audio tapes two people have heard, there has to be another incentive to justify this sorry compilation’s pathetic existence. Well, since splitting up in 1992 this band has been sitting on its hands doing nothing. Now almost two decades later they decide to re-record the very material that made them famous and plaster a couple of sorry excuses of new songs in the beginning to justify the existence of this release in the first place. I don’t know what’s more insulting, the fact that there’s no evolution whatsoever between the new songs and the older ones, or the fact that this release is being hyped as the next big thing – when it’s obviously not. What we have here is a band two decades late and a couple of dollars short to a party they weren’t welcome at to begin with. Thinking yourself to be influential and actually being influential are two different matters altogether, and they shouldn’t be conflated because that’s the easiest thing to do. Now excuse me, I got better stuff to do than listening to some washed up has-been’s extended midlife crisis.