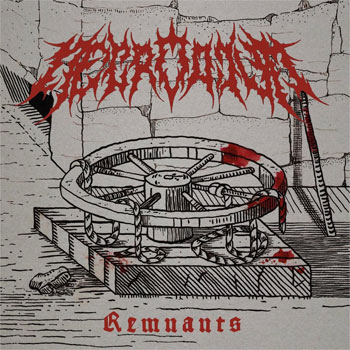 The underground is truly the gift that keeps on giving. Apparently there are new lows to be charted, and new disappointments to be had (or old fears to be confirmed, however you wanna slice it). Necrodium, the band name is about as creative as they are going to get here, hail from Finland and play chug-groove death metal. Six Feet Under is apparently not only popular in Germany, but in the land of a thousand lakes too. The font and artwork is reminiscent of Spanish death metal combo Graveyard, the album title is shared with the much better (but now sadly defunct) California technical death metal band Insentient, and the whole sounds like a speedier Gall-Butler era Six Feet Under at best, and like Torture Killer at worst. It makes you wonder how this beloved industry of ours operates. If redundant bands like this are allowed a recording deal, how are genuinely talented bands supposed to stay afloat? The only good aspect of this record is frontwoman Linda Alén-Koskinen, who does her best prime era Chris Barnes (somewhere between "Butchered at Birth" and "The Bleeding") impression with young Glen Benton shrieks thrown in for good measure. There's a reason why Demilich is still considered the once-and-forever reigning kings of Finnish death metal despite not releasing an album in two decades: the standard they set in 1993 is yet to be matched. "Remnants" will not go down in the history book as mandatory in shape or form, let alone as a continuation of the vintage Finnish genre legacy. No. It is merely functional in the barest of essentials. They'd be the ideal support band on a Torture Killer show, but nothing more. Linda Alén-Koskinen deserves a better band than this. This is not it.