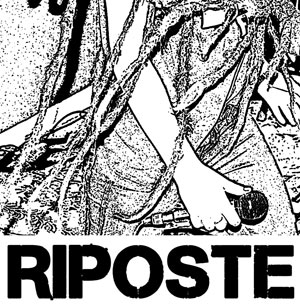 Over the last couple of years the international underground has lost several big name hardcore/fastcore bands including notable icons Curmudgeon, Deathrats, Rape Revenge and Idiots Parade. Coming from Paris, France the newest sensation in the genre is Riposte. In tradition of Deathrats, Buried at Birth and Curmudgeon the quartet plays minimalist, to-the-point and violent hardcore. On "Demo 2015" Riposte leaves nothing to the imagination at all. The shortest track clocks in at a brisk 29 seconds and the longest one at 49 seconds. The song titles ('Distress', 'Force-Feeding', 'Brutal Vengeance' and 'Ruthless') tell you exactly what you're going to get with this demo. Bathing in punk ethos "Demo 2015" is a feedback – and reverb-laden ditty with a booming bass guitar tone, topped off by a throat-shredding performance by frontwoman Lu. In the vocal department she channels the strongest moments of Krystina Krysiak (Curmudgeon) and Christine Cuniff (Deathrats). She might not be on the same intensity level as Veronica Mars (Buried at Birth) yet, but few are. In hardcore tradition the production is functional, and crunchy – but calling it produced would be a stretch. Released in true underground form on cassette tape format Riposte offers up three minutes of politically-charged, socially aware violence that will appeal to punk, hardcore and metal fans alike.