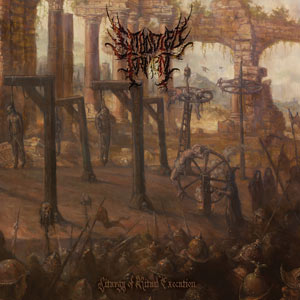 It seems that, by and large, US label imprint New Standard Elite is functioning as a contemporary variant of Unique Leader/United Guttural circa the early 2000s. Embodied Torment, who formed in 2011 as the uncreatively named Sever Dismember, is the band centered around former Serpent & Seraph bass guitarist Matt Chaco (who does vocals here) and his wife Cindy (who provides drums). From the sound of this record Embodied Torment seeks to fill the void left by fellow Californians Deeds Of Flesh (now more of a recording band), Disgorge (who continue to exist, but haven't released an album in a decade) and Doug Cerrito-era Suffocation. Joaquin Chavez is a disciple of the Diego Sanchez school of songwriting, and David Ko's bass is felt more than it is actually heard. It briefly has a moment in two songs ('Fermented in Existential Terror' and 'Rädern'), but it can be heard in 'Epoch Of Suffering', the only song on the album to have a guitar solo, however compact. Especially in terms of drumming Cindy makes Chad Walls' style her own. Fittingly for the style the record is concluded by a cover rendition of Brodequin classic 'Judas Cradle'. The home-recorded production works for the most part, only the snare drums have that annoying clonking sound typical for this brand of death metal. At least the cymbals and kickdrums sound immense and commanding. The truly wonderful artwork by Paolo Girardi is a definite selling point, although hopefully we'll see Cindy paint art for her own band in a not too distant future.