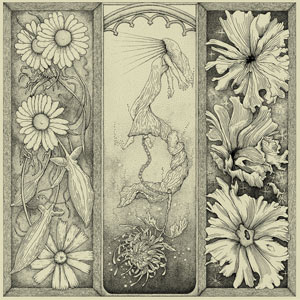 That Detroit, Michigan powerviolence/hardcore outfit Cloud Rat is probably the most prominent player in its scene should come as no surprise. The now-quartet released two critically acclaimed albums prior with "Cloud Rat" (currently onto its fourth pressing) and the even more frighteningly intense "Moksha" – and its profile is rising in both North America, Europe and beyond. "Qliphoth" is the band's third, and most ambitious effort channeling its spiritual undercurrent in a harrowing and uncompromising set of songs. The album is the recording debut of Brandon Hill, who provides electronics and effects, and his contributions fit suitably with Cloud Rat's pessimistic and downbeat lyrics. Madison Marshall's vocals are more hardcore in delivery, but as percussive and intense as ever – even though her arsenal has expanded as she performs clean chants in opening track 'Seken' and choral ones in 'Thin Vein'. As before there's a spoken word part in 'Rusting Belt'. Generally the album is more hardcore/punk/sludge oriented musically. The riffing puts greater focus on sludge instead of the hardcore/punk and grindcore of earlier records. The album was recorded at Lakebottom Recording House in Toledo, Ohio with J.C. Griffin producing. "Qliphoth" is adorned with spectacular handdrawn artwork by Fernando Pena for Celldeth. With the recent split of Curmudgeon, Cloud Rat now is the definite flagbearer of the genre they helped pioneer. For once the headlines were true: "Qliphoth" is a cathartic experience, but one you'll gladly revisit time and again. Excellent.