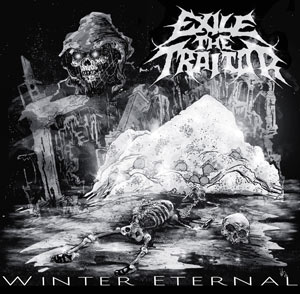 This Glasgow, Scotland "blackened death metal" band have been around for only a meager four years, but already have released a demo, two singles and two EPs. "Winter Eternal" is better than the "Denounce" single of a few years ago. They persevere with the watered down Tompa Lindberg screams, but at least now they're mining from "Terminal Spirit Disease" and "With Fear I Kiss the Burning Darkness" more than the lamentable populist jock metal shtick of the vacuous "The Slaughter Of the Soul". The dual vocals (one part Sven de Caluwé, the other Tompa Lindberg - both terrible in their own way) are as tired and tiring as the choppy, nervous metalcore riffing we've been subjected to since the early 2000s. "Winter Eternal" is a step into the right direction for this self-described "blackened death metal" band, although you're hardpressed to actually note any mentionworthy black – or death metal aspects on this EP. Unless you count the occasional very lite Dissection melody. For some reason "The Slaughter Of the Soul" is held up as some groundbreaking work of metal, while it was the artistic death warrant of a once-relevant band. The sooner all these imitators realize this, the sooner the metal underground will regain its sanity. "Winter Eternal" has nothing to do with death metal, and everything to do with vacant acts like Lamb Of God and The Absence. Exile the Traitor, as its blatantly scene-friendly name implies, is just another very average jumpdafuckup metalcore band hidden underneath a very light, and very populist, death metal paintjob - and frankly it shows. This has nothing to do with underground metal.