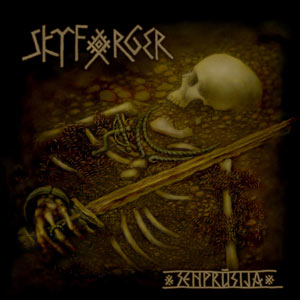 Skyforger are one of Latvia's earliest metal bands having a history dating back to 1991. As such they even predate one-time death/thrash metal band Dzelzs Vilks (who released the excellent "Mirušas kaijas" in 1995) by handful of years. The band is exclusively devoted to the antiquity and pagan mythology of its home country. Most of its releases have been issued through black metal specialist label Folter Records, only 2010's "Kurbads" was released through Metal Blade Records. "Senprüsija" is the successor to 2010's "Kurbads" and the first through its own label imprint. Given their longevity Skyforger is a far darker and more metallic entity compared to the populist swill that fills out the Pagan- and Heidenfest bills. The record offers a nice cross section of songs with some being more straight up metallic, and others more folk/pagan metal in writing. Skyforger never lowers itself to the path of least resisitance, and avoids the pitfalls that many lesser talented bands in the genre tend to fall victim to. On this record you'll find no watered down riffing, cheery singing and two-chord drinking songs passing itself off as actual metal. No, Skyforger has the benefit of experience, and has been toiling in the underground long before the folk metal boom of the early 2000s. "Senprüsija" is a folk metal record they want it was meant to be played.