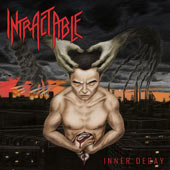 What exactly is intractable here? The conclusion that you can’t have your cake and eat it too – but apparently can’t decide what said cake is, in the first place? Whenever something is described as modern metal, I usually tend to stuff my ears and run for cover. For good reason, I think, since most of what comes out of that genre is utterly terrible, but for some unfathomable reason remains popular with the casuals. Anyway, Intractable hail from Switzerland and play a hybrid of neo-thrash/groove and straight-up hardcore. The vocals are somewhere between Gary Meskil (Crumbsuckers, Pro-Pain) and Jan-Chris de Koeijer (Gorefest), which are surprisingly effective. I have no idea which audience this band aims at because this sounds as a compromise between the two genres leaving out the ‘hard’ parts of each individual style. The riffing is mostly the straightforward, no-frills type you expect in hardcore, but the song construction clearly is of a neo-thrash/groove metal architecture. Since the neo-thrash/groove is the prevailing stylistic choice I will judge it upon those merits. As such it is a fairly typical exercise of the genre. The dynamics are exactly what you’d expect, it has a nice groove and the rhythm sections are meaty and crushing enough. Does it ever reach the lofty heights of a “Burn My Eyes”? Fuck, no! Overall, this is another underground band doing their thing for their local fanbase. Within that context it is an okay release, but aspiring to greater goals just isn’t going to happen based upon “Inner Decay”. Now, when you look at it from a hardcore perspective, it is pretty serviceable. The songs waste no time and get to the point fairly quick. There’s enough variation between slow and fast songs and some of the drumming is quite good. As a hardcore variant it is pretty good, as a neo-thrash record it is utterly pedestrian. So, a little piece of advice for when you sent me your next record. Decide what you want to be: hardcore or neo-thrash, and then run with it, hard. I have no patience for bands as confused as the average 14 year-old girl. Nor should you. Until that time, I will continue to sit back and throw stones at random passersby. They knew not what hit them, but you very well did when you decided to send this in for review.