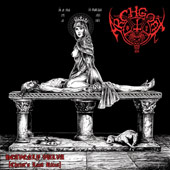 Archgoat is one of Finland’s oldest and most revered black metal formations, having formed in 1989. The band split in 1993, but reformed in 2004. Most notable in their membership is Torture Killer guitarist Tuomas Karppinen behind the drumkit. As with past recordings the riffing here is straightforward and simple, recalling Blasphemy and Marduk in equal measure. The drumming is more death metal oriented which isn’t too surprising given Karppinen’s track record. Archgoat has perfected the style Blasphemy pioneered, being an unholy mix of primitive death metal, early black metal and even a bit of grindcore. The vocals of Angelslayer are thunderous and booming, recalling Dave Rotten (Avulsed), former Kataklysm grunter Sylvain Houde and former Incantation frontman Craig Pillard. The riffing is in the vein of “Morbid Tales” era Celtic Frost and “Seven Churches” era Possessed. Unlike many of their contemporaries Archgoat do not solely focus on speed, but retain an atmosphere of darkness and disgust through out, through the light usage of ambient keyboards and effects. ‘Penetrator Of the Second Temple’ starts off with a sample of women moaning in erotic ecstacy, which is apparently still is a novelty in certain underground circles, the track itself is far slow than the cuts that preceded it. ‘Passage to Millennial Darkness’ concludes this EP in blasting and utterly remorseless fashion. Archgoat proudly continue the tradition of legendart Finnish genre acts such as Beherit and Blasphemy. This EP isn’t exactly mandatory, but it is a fine display of primitive black metal done right and with passion. Finland continues its steady flow of quality black metal.