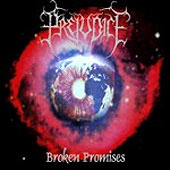 Technical death metal outfit Prejudice have been around longer than most people give them credit for. As a result it comes as no surprise that their seminal debut "Broken Promises" isn't that known by certain categories of their core audience. Recorded in a one week period at Harrow Studios, Losser in 1997 Prejudice managed to achieve a fairly strong sounding record for the time. Opener 'Society's Victim' immediately grabs the listener by the throat and sets the tone for the rest to come. Groovy mid tempo death metal build upon a solid foundation of technical death metal riffs with slamming hardcore breaks and rhythm sections. Vocalist Erik Lemmens spews forth angry screamed grunts in a streetwise manner, while guitarist/backing vocalist Def provides understandable deep growls. 'Eyes Only' has perhaps once of the better intro sections the band has written up till then, reminding of "Soul Of A New Machine" era Fear Factory. 'As Long As Its Lasts' already displayed that Prejudice had the American death metal thing in their fingers but unnecessary hardcore and synthesizer parts pan most of the effect on this cut. Synthesizers are present on this album, although they serve no real purpose than to create contrasting atmospheres and fill in the breaks through out the record. 'Second Guess' is one of the more solid cuts on this record, featuring a great guitar - and bass solo and a building of dynamics that eventually leads up to both events. 'Perpetual Pain' paves the way for their later repertoire, as it serves for a rudimentary blueprint for much of the material on "Reality" - the successor to this debut. 'Prejudice' is the band's personal anthem and ideological vessel on this record that still stands today as a much demanded classic in their live sets. But the album isn't without its faults either. The songwriting often leaves much to be desired, as a lot of the tracks have a disjointed structure and an unnatural flow to them. The ideas are present but either Prejudice misses the technical abilities to execute them to the fullest or hadn't a firm grip on what point they tried to get across. The vocals grow a bit monotonous in the long run and in the few cuts that backing vocalist Def has he often outshines lead vocalist Erik. Interaction between lead - and backing vocals is nonexistent. On a mere structural level, certain parts drag on too long than is deemed necessary or enjoyable. The production and final mix were of a superior quality compared to what Belgian bands where putting out at the time. The lay-out of "Broken Promises" is colorful but doesn't look anywhere near as professional as the band's later outings. Given the circumstances "Broken Promises" becomes a strong if not flawed debut.